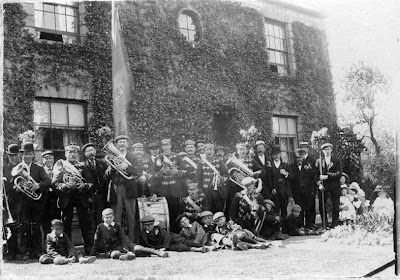 FYNSTOKE TO FINSTOCK: A Short History

Finstock, together with its neighbours Charlbury, Fawler and Leafield, used to lie in a clearing in Wychwood Forest that stretched from Woodstock to Burford.

In 1135 the village of Finstock is referred to as Fynstoke. At this time the village formed part of the manor and parish of Charlbury. Roman coins and Romano-British potsherds have been found in the village and it is thought that there was certainly a settlement of some kind here at the time of the Domesday survey of 1086 when it formed part of the 'Hundred of Banbury' belonging to the Bishop of Lincoln.

Later much of the forest was cleared for growing arable crops, and, during the Middle Ages, barley was the main crop in Finstock. Other land was used for sheep grazing, and many of the Finsock people were involved in the woollen industry — the carding being done by men and boys and the spinning by women.

In the early 1500s the manor of Charlbury and its land, including Finstock, was owned by Sir Thomas White, a London tailor who founded St John's College in Oxford in 1555. The manor was included in the college's endowment. As the college lands were owned by an absentee landlord, the land was leased to many people including the Lee family of Ditchley Park (from 1592-1776). The college then resumed direct control until 1857 when the lordship of the manor passed to Francis Spencer, 2nd Lord Churchill of Wychwood, the owner of Cornbury Park. It still remains in the possession of Cornbury Park today although most of the manorial rights have lapsed and much of the village of Finstock is now freehold.

During the early part of the twentieth century the principal occupations in Finstock were glove-making at the village hall site, carried out by women, while the men and boys worked as agricultural labourers on the land. Today most inhabitants of the village commute by car and bus to Witney, Chipping Norton and Oxford.

Finstock is now a separate civil and ecclesiastical parish, its population mostly living on the sides of th large triangle formed by the main Witney-Charlbury road, School road and the High Street. In recent decades there has benn much in-filling with new buildings to complete the triangle. Four new estates were built during the last century. The farming now is mainly arable: barley, wheat and oilseed rape being the main crops, although some mixed farming is still found.

T.S Eliot came to Finstock to be received into the Church of England. William Force Stead, who was a fellow American, came to England as an American consul, but was later ordained and became chaplain of Worcester College, Oxford. After Stead met Eliot in 1923 (they shared a love of cats!), Eliot became drawn to Anglicanism and Stead agreed to baptise him. Stead was then living in Finstock Manor, which he described as a "fine seventeenth-century gabled house". He invited Eliot to stay at the Manor before his baptism, which took place in Finstock Church on June 29th, 1927.
12 comments:

Spanish Liquor Day is coming - a chance to walk in the Forest from Leafield Five Ash Bottom down to the Kennel Lake or just walk down Patch Riding.

Spanish Liquor is made up with some pieces of hard liquorice with two to three black gobstopper type sweets and white peppermints which were crushed, made up on Saturday night and shaken well on Sunday Morning.

You take your bottle with the mixture in down to the well behind the kennels called the Iron Well. If it's still there behind the fencing. We were forbidden to drink much of it on the way home.

Some years ago I was with the late Bill Campbell who knew the forest very well and all about the Spanish Liquor custom. He told me that the well which was originally used was called Ussell, but was flooded when the lakes were formed. John Kibble believed that the custom was a remnant of well worship which was forbidden in 963 (some custom). He also thought it would never die out, but I think he will be proved wrong. But, there was a man from Leafield, who used to take his bottle of mixture to the well up until a few years ago.

Finstock people would go to Lady Well at Wilcote, but because we lived at the end of Patch Riding, we always went into the Forest.

MEMORIES OF MY BROTHER-IN-LAW'S MOTHER

An Annual Palm Sundy walk from Finstock to Ladywell in Wilcote was an event which was very much looked forward to, especially by the Children of the Village. The making and drinking of "Spanish" Water or Liquor as it was called was an important part of this event.

Mrs. Ivy Pratley, describes the making of the Spanish Water.

"On the Saturday evening before Palm Sunday, we children would crush humbug sweets and white peppermints together and to this we would add some pieces of chopped liquorice stick, the mixture was then added to a bottle of water and we would sit around the room shaking the bottles until it had dissolved".

This bottle of liquid was drunk the following day while walking to Ladywell. They also carried with them, in a paper bag, some of the dry mixture, which was mixed with water from the well to drink on the way home.

Early on Sunday afternoon the walkers would set off, one group using the footpath by the Plough Inn and another group near the top of High Street using the path to the left of the road about 50 yards east of Gadding Well.

The groups then merged to follow the path through Wilcote Field Longcut or the Longcut as it was known locally.

Most of the girls were given a new straw hat for the occasion and these were filled with primroses and voilets on the way through Sumteths Copse. They then crossed the field to the front of Wilcote Manor and followed a route past St. Peter's Church to the Ash Avenue which leads directly to Ladywell.

This tradition which is believed to have had its origins in Pagan Celtic Well Worship, continued until the outbreak of war in 1939.

In recent years one or two people from Finstock and Leafield have taken "Spanish Water" to the Iron Well in Cornbury Park using the entrance to the Forest at Five Ash Bottom in Leafield.

Shops and public houses in Finstock ... and a Murder ...

Finstock used to have three shops. One was in School Road and at one time was a Fish and Chip shop, run by Tommy Franklin who I believe came from Birmingham. The second was in The Bottom and was run, with the Post Office, by Mrs. Dore and her two daughters Nellie and Meeme. There was a third shop at the Crown Public House which sold sweets, sugar and tea, but was mostly run as an off-licence. 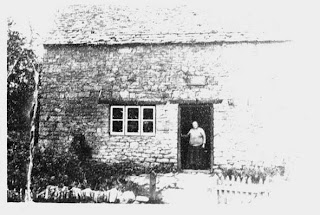 There were two other Cottage Shops which I can remember. One was run by Mrs. Harris who lived where David Pratley lives now, up the High Street, and was, I believe, his grandmother; they also sold fruit. My first banana came from there. The other shop was run by Harry Woolford, who was my uncle, my mother's elder brother. He sold cigarettes, tobacco, tea, sweets and chocolate. (See photo above which shows the licence to sell tobacco and cigarettes.)

The coming of the war saw the end of these little shops, except for The Crown which continued as an off-licence.
The Waterloo Arms, which was at the crossroads at the top of the High Street, had a licence to sell beer and spirits, and is now turned into houses. Mr. Howse, who used to have the Waterloo Arms, also had a blacksmiths shop. I have very happy memories of spending time, as a boy, pumping the bellows on his forge, making his fire burn away. I used to take our cart horse there for him to shoe. The horse would kick at Mr. Howse, but it didn't seem to worry him, but how I hated that horse. Mr. Howse had a pocket watch that he bought from a soldier in the First World War which worked by a chain which ran around the outside of the case. He had a great deal of patience to put up with me running around his forge and burning his fire away.

In the fifties, the forge went and in its place Cyril, Mr. Howse's son, had a petrol station and shop. It is said the Waterloo Arms lost its licence to sell beer and spirits on the premises because Finstock and Leafield men used to meet there and fight -- and a Leafield man died in a fight in Pound Bottom on Leafield Road. But no one seems to have ever been held responsible, but it could have been murder. One for Shaun to look into perhaps!
11 comments:

MEETINGS are held in the Village Hall, Finstock. They are held on the third Friday of the month (Except March and December when the meeting will be on the 2nd Friday) and begin at eight o'clock.

THIS SEASON we will again be starting our meetings with Shaun Morley's very successful short talks about local topics based on the Finstock records. 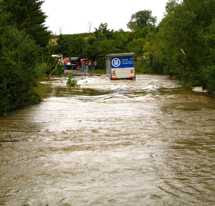 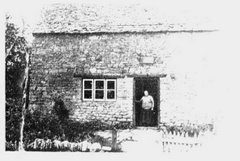 The shop at the Crown Pub. The sign is above the door. See Roy's Shops and Pubs piece.

Some photos from the archive 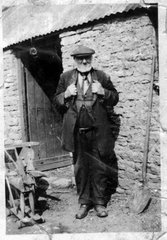 A Finstock resident from many years ago 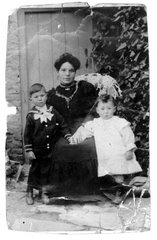 Mrs Hitchcox, mother of the late Iris Lever, with Iris and her brother 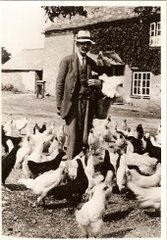 Frank Alderton, at Home Farm with his chickens (date?)